Miss Caitlin, living in Oregon, whelped her first litter Friday and Saturday. (Yes, two before midnight and the rest after.) They did lose two, but the remaining four are quite strong. Three girls and one boy. She was bred to a very nice black boy, Ch. Coedwig's Malachite, aka Rocky, so all are black.

So now I have to wait until the first of February to go up to Oregon and make my selection.

HAPPY THANKSGIVING TO ALL, including the dogs!

Yaaayyy! Kennedy did very well at an international show today, winning his 8th BOB, 10th CAC, and 4th CACIB. Wahoo! Congratulations to Taija and Kennedy!
Posted by Jennifer Roberson at 10:56 AM 2 comments:

This Saturday Kennedy hits an international dog show. He hasn't been out since the French National, so it will be interesting to see how he does. 8-)
Posted by Jennifer Roberson at 10:14 AM 5 comments:

The wonder of bonding with a dog is far more important than wins, but nonetheless we do show them off to people. I want to list a few highlights of Cassidy's short career.

"Debut: 2007 Southern California Specialty and Orange Empire all-breed shows, at 11 months of age. He won Best in Sweeps at the specialty, and went on to WD at both the Orange Empire shows.

Championship: Was shown again two weeks later at the Fiesta Cluster in Scottsdale, Arizona where he finished. He also was awarded BOB as a class dog over a top special.

Cardigan National: 2007, in Kentucky. He was Runner-Up Best Blue Merle in the Megan, and 2nd in his Sweeps class. He made several cuts in the BOB judging. In Stud Dog, he helped his sire, Fudge, take 2nd Place.

AKC/Eukanuba Show: in 2008, he qualified for the "Invitational" because all of his points came out of Puppy and Bred-By. He was one of the also-rans, but it was still a thrill to step out on the blue carpet with him.

Specials Career: He was very lightly specialed as I waited for him to mature a little, since he finished so quickly. He was awarded a few BOBs.

2009: He was entered in the AKC/Eukanuba show again, this time under a breeder-judge. Unfortunately, he did not live to strut his stuff again.

Cassidy was an incredibly mellow dog, not at all macho. Just sweet and happy-go-lucky, a complete ragdoll when I carried him around cradled in my arms upside down. Initially he was difficult to show because he kept jumping up on me, wagging like crazy. (I finally learned to bait him down low.) He also was fascinated by the grooming table when in the ring and "helped" me lift him onto it by standing up and putting his front paws on the edge. His movement was lovely with terrific reach in front, plus the extention and correct propulsion in the rear. He had an exquisitely beautiful head and lovely ears. Both eyes were brown, and he sported a wonderful black eyepatch over and around his left eye.

He was 2.8 years of age when I sent him to the Bridge.

Too much damage to his intestines, plus peritonitis. Poor and painful prognosis. I let my vet send him to the Bridge while he was under for surgery.
Posted by Jennifer Roberson at 3:07 PM 13 comments:

Cassidy is at the vet. He apparently has an obstruction (or a partial one) and they're trying to get him to pass it with hourly applications to Vaseline, which acts as a laxative and can often move the foreign body (usually rocks)out through the intestinal tract. Did not happen yesterday. Waiting to see if he has to go in to surgery.
Posted by Jennifer Roberson at 7:15 AM 6 comments: 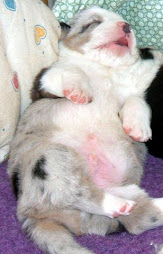